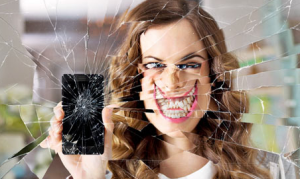 Series Two of Brooker’s Black Mirror has come and gone, and thus it’s time for me to muse on the meaning of his madness. If you haven’t already, I suggest you start with my post about Series One.

Episode One: ‘Be Right Back’ 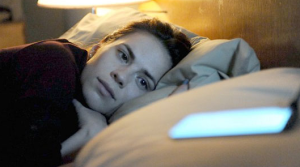 Synopsis: Martha, (our protagonist) loses her partner, Ash right at the beginning of the episode – we presume in some kind of car accident. At the funeral her friend Sarah approaches her, telling her she can have Ask back. We learn that Sarah has signed up to a service where-by, through the use of Ash’s social media posts, emails and anything else he has uploaded to the internet, Martha can “talk” to Ash online, then on the telephone and then in “person.” Martha then realises that the new Ash isn’t like the Ash she loved, he is only an imitation, bred from the STUFF we put on the internet, which is designed, by us, to make us appear how we wish to appear. In the course of all this, Martha discovers she became pregnant before Ash died. Martha decides to keep the new Ash in the attic so their daughter has a, somewhat odd father.

Observations: For me, the most glaring observation is that what you put on social media sites isn’t always what is real. For example, Ash ‘shares’ a photo of himself as a child on social media, saying it was ‘funny’, then explains to Martha that it was actually a very emotional photograph for him and cries; when the new Ash turns up, he picks up the photo and says ‘funny’ because that’s what the information on social media has told him the real Ash felt about the photo. From Brooker’s POV, the episode also showed the progression of ‘internet dating’, from emailing, to IMing, to telephone and then meeting in person – and being disappointed with the result.

Synopsis: Victoria wakes up. She’s in a room that we presume is her own bedroom. She doesn’t know where or who she is. She moves downstairs and discovers that no one is in the house with her – all she finds is a photo of a child, who she presumes is her daughter. Outside the house every member of the public is watching Victoria, most of the filming her or taking photos with their smartphones. She is crying for help but no one comes. Then people begin to chase her. She then meets Jem and Damien, who seem to not be afflicted with the ‘recording everything’ disease that the rest of the public are. Jem and Victoria (Damien dies) travel together to find ‘White Bear’ where Jem says the power lies; destroying it will make everyone whole again. Along the way they meet people who want to harm them, have harmed others or they need to harm to get along. When they reach White Bear and enter the story is flipped on its head and it comes to light that the whole journey was a set up, Jem, Damien and the others they meet are actors. Victoria has committed a crime: torturing the child from the photo and killing her (with the help of her fiancee.) The whole day had been set up, the public as an audience, like a zoo. This is her punishment, and she must relive it everyday. The episode ends with the man who set the whole thing up putting Victoria back in the house and drugging her.

Observations: Possibly the darkest of all the Black Mirror episodes, White Bear touches on not only the public reaction to criminals, but also how they should receive punishment and (obviously) the evils of mobile phones. Additionally, the role of the story and how that role can be changed in a matter of words. Victoria (who plays Sugar in Sugar Rush), begins as a sympathetic character, as you presume that she has been wronged in some way: the protagonist usually has. Turning this on it’s head, the viewer is wrong- the feeling that the viewer has built up for Victoria is taken and you are told that the feeling is wrong. 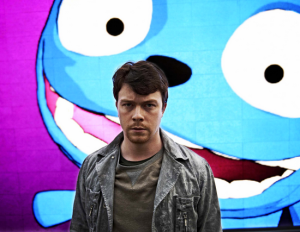 Synopsis: Jamie, a failed comedian, is the voice of Waldo, a rude, crude, digital blue bear. As the “political” episode of the series, The Waldo Moment follows a local election where Waldo ends up running, against Mr Monroe (Conservative) and Gwendolyn (Labour). Jamie then meets Gwendolyn in a bar and they end up in bed together – but of course she is concerned about her career and blows Jamie off. On a TV panel show, Jamie (as Waldo) lets rip at Mr Monroe and Gwendolyn, exposing her as a ‘career’ politician, which he learnt in their time together, this riles them both up and himself. Jamie then meets with a man who calls himself ‘the agency’ who thinks Waldo can become a global political figure, Jamie argues with the producer (Napier) and leaves the campaign. However, on the last day of the campaign he rejoins, plagued with guilt he begs people to not vote for Waldo and Napier (taking over the control of Waldo) urges the public to attack Jamie. Jamie watches the election results from a hospital bed – Mr Monroe wins, Waldo comes in second and Gwendolyn in third. As the credits roll, Jamie ends up on the street, homeless. He sees Waldo on screen and smashes it in anger, he has attacked by two police officers.

Observations: As with the first episode of the first series, this episode has political undertones but expresses the sideshow that politics can become. Waldo, Mr Monroe and Gwen all represent the politicians that we do have today – okay, we don’t have a swearing blue bear to vote for, but if we did we would over the snotty, Eton/Oxbridge educated, white man or the young, career politician who is standing not for principles, but for career progression. Jamie’s character is intriguing, he is torn between doing what will make him a rich, famous figure and doing what he believes in. When Jamie does go with his gut and tell people not to vote for Waldo, he ends up poor, homeless and alone. The other observation that now comes to mind is that Waldo represents the front that politicians put on; someone is always pulling the strings behind the ridiculous face.