As the time approaches that I intend to partake in (what may seem like a crazy) 9 month stint of reading exclusively books written by women, there is at least something to keep my mind occupied. The movie adaptation of The Hunger Games has hit our screens. 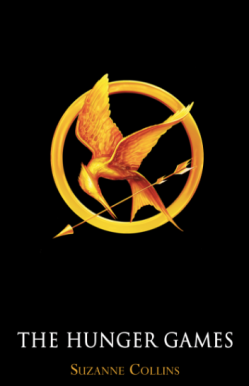 For those of you who haven’t been hit with Hunger Games Fever, a short summary:

Katniss Everdeen is 17. She lives in district 12 (of 12) in a world that is hungry. After a violent war that destroyed district 13, a new law was imposed, bringing about ‘The Hunger Games.’ A reality TV show, set up to remind the teenage population of the random cruelty of life; The Hunger Games will make you famous, rich, your family will be safe and have food and resources for life, or it will kill you.

Twenty-four teenagers, between 13 and 18, a girl and boy from each district, are thrown into an arena with only the innate skills they own and what the producers provide. They then must battle it out to survive, against each other and against anything the producers throw into the arena.

The Hunger Games is everywhere. It’s got posters all over the tubes, promotions all over the book shops, reviews in the newspapers and the internet. It’s been called ‘the new Twilight.’ People keep asking me why.

Dystopia for younger readers has been done before but not to the popular extent that The Hunger Games has managed. Lord of the Flies for example is often studied during the early teenage years and this year Blood Red Road by Moira Young won the Costa Book Award (Children’s Category.) However, The Hunger Games has such a wonderful balance between the dystopian feel of Adult Fictions such as 1984, The Road, Brave New World, Day of the Triffids and the things that young adults still want from a novel: gore, romance, trills and most of all a sense of collectivity, The Hunger Games is only rightly compared to Twilight in that it has broken into the Cult teen book world.

I dislike Twilight, though I haven’t read them (yet), so I can’t complain with that much vigour. However, it doesn’t adhere to vampire folklore, and that gets on my nerves; The Hunger Games doesn’t have this problem. Dystopia is so wonderful because it allows the author to set it in any world they like, wherever their imagination may take them.

Suzanne Collins is a brilliant example of an author who has managed to tap into one of the few fields where, generally, women excel: Children’s fiction.

J.K.Rowling, Jill Murphy, Stephanie Meyer, Julia Donaldson, Jaqueline Wilson, Beatrix Potter, Louisa Rennison, names that fill the Children’s and Teen sections in bookshops. Cynics would say that this is due to a woman’s connection with children, or that it’s an easier market to break into, but as someone who has worked with children let me state this: children are the most honest critics. If they don’t like it, they’ll say; they don’t need a reason, ‘I just don’t like it.’ Just one of the many reasons why I love Harry Potter so…but we’ll come onto that soon…So please don’t think I wont be dipping my feet into children’s literature too, because believe me, it’s on the list.